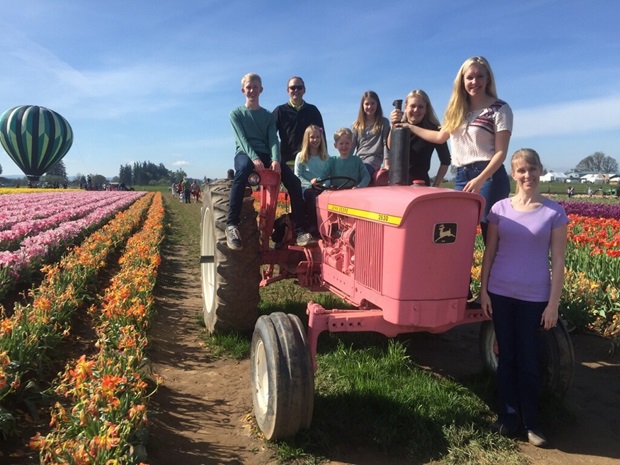 What is fun about being a host family?

I have really enjoyed that Alice has taken the time to teach one of my daughters Swedish. While I know it is just a beginning, it is fun to hear Alice teaching her and talking to her. We think it is fun to eat yummy Swedish foods.

It is fun to show things to Alice that are unique to where we live such as the Rose Gardens, Tulip Festival or the Oregon coast and windsurfing. She is appreciative and likes to see and do new things. :) I really like her open and positive attitude to what we do.

Has something happened that you didn't expect?

I feel that I have learned to be more respectful of other people's choices. Alice has been good with that. Our political and religious worldview are almost completely opposite of Alice's, yet she is respectful of ours and loves us anyway. (We love her, too!)

I have learned that Alice is very good and wise beyond her years in many ways in adjusting to a whole new life. She has taught me about being resilient and having courage through her example. She is also great to say thank you! ;)

We enjoy chocolate balls, Swedish meatballs, the creamy cucumber sauce and the potato wedges that Alice has made for us! We also love that Alice is willing to spend the time to make good foods for us!


What have you learned about Swedish culture that is interesting?

The first thing that comes to mind is that "high school" or gymnasium as you call it is for an extra year longer than ours. Graduation is not until age 19, but graduation for most students here is age 18. In fact, some of the students are still 17 when they graduate.. All students are placed in a grade based on the year they were born instead of in American culture those with a birthday from September 1st to August 31st being in the same grade.

It is interesting that students stay with their same group of students in their one class and the teachers change to different rooms to teach them. Students choose a "direction" for their future career at the age of 14/15.

Almost everyone in Sweden attends college and does not pay directly for attending but rather it is paid for with taxes.

Everyone seems to have a job in the summer when they are about high school age and are guaranteed to have something for at least a few weeks. All children learn English as part of their studies during school. Their English is good. They listen to songs and watch movies and TV in English as well.

In Sweden, teens in high school are treated with more respect and as capable of making their own decisions, and the responsibility to take charge of their education is given to students which is where I believe it should be. In school here, the students have to ask permission to go to the restroom or to leave the classroom at all. Parents have to call and excuse students if they miss class. This seems disrespectful of the teens growing ability to be in charge of doing what they should be doing in their lives, and a lack of trust that they will do the right thing. How can they learn to be independent if no one will give them any chances to act responsibly.

Sweden is not a religious country and most of the population are atheists. Most people do not attend church even for Christmas services. This is different from America where most of the people have a religious conviction even if they do not attend church. I believe that Americans are becoming more like the Swedes in that the number of them do not believe in a religion and consider themselves to be atheists.

Sweden is a much more liberal country politically than America. What we look at as extreme here is not considered extreme in Sweden.

Swedish people are more reserved in public. They do not strike up a conversation with someone they do not know typically on a bus or train or out in the streets. Americans are more likely to talk with other people in these kinds of situations. They tend to be more open for interaction when new people out in public.