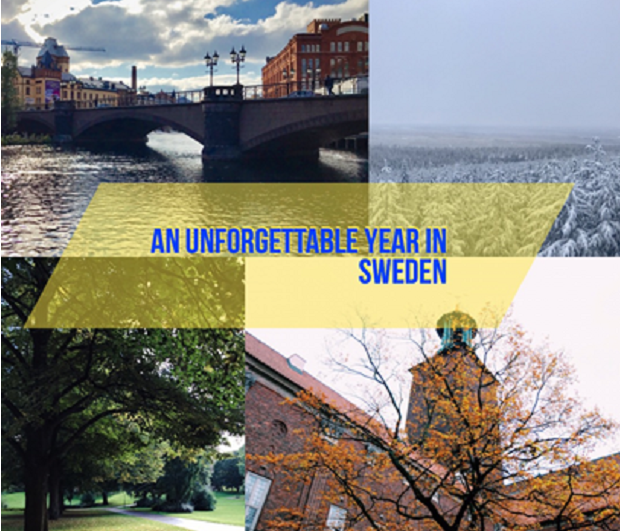 From the first day, I told my family about going abroad for a year. They had wondered where I would go then. Since I had an opportunity for explore somewhere for almost one year, I did mini researches about many countries, and Scandinavia attracted me the most. Eventually, I end up with Sweden as the destination on my flight ticket a couple months later on.

The journey was really begun in the middle of August, when everything in Sweden was very new to me. Fortunately, I had met the wonderful Swedish family who live in an amazing city, Norrköping in Östergötland. Thanks to these fantastic squads, my exchange year had fulfilled with load of experiences, and it had become my unforgettable year!

To begin with, the things I’ve done in August. Have you ever heard about crayfish party or Swedes called ”Kräftskiva” ? This was the first Swedish festival I have experienced. We sucked and ate a lot of fresh crayfish for main dish and ended up with fika and dessert. It’s such a good day, spending a quality time with lovely people.
Another important part of being an exchange student started when the school had opened. I was introduced as a new member of Naturvetenskap class, which mainly study about scientific and mathematical subjects. The first thing that impress me at school were the teachers, especially, my mentors. They were very nice and understanding since the first time we met until the last day I left. Similarly, the classmate were friendly and helpful. Even though we didn’t talk that much in the beginning, we gradually knew each other according to the passed time. I also took a ceramics and glass class, as an individual subject, in another school. It was fun, relaxing and challenging. I really liked it because I had done lots of stuff by my own idea and hands. In the weekend, I often went to fritidshus ,called summer house sometimes. I spend chilling time with my host family. I remembered, the first time I have been there, it was such a nice, calm and peaceful place, that impressed me a lot. We went sailing along the Baltic sea, finding the small island to rest for a while, and having grilled-salmon for the lunch. In addition, I did fishing in Sweden for the first time yaaass!

One Friday evening after school, my host grandma, called mormor in Swedish, asked me and my host brother if I would like to go to the opera concert with her. Absolutely said YES!. That’s my first time listening to the live opera and orchestra concert. They were awesome! Time had passed, I gradually learnt more and more. One thing that I had learnt since the first day I arrived Sweden was FIKA. Fika is one of my favorite Swedish things of all time! I found many kinds of sweets and tea that can perfectly be eaten together. One of the best is Kanelbullar, called cinnamon buns in many areas, but Swedish kanelbullar are not quite the same. They also have a day for Kanelbullar called Kanellens dag on October, 4th every year, when the fika was served with Kanelbullar. I really enjoy this sweet!In the last week of October, the student have a week for holiday. My family and I have visited the three big cities, including Stockholm, Gothenburg and Copenhagen. We went to Stockholm for the first stop, visiting popular places around the city, having dinner in different restaurants. Next stop was Gothenburg, spent times by visiting the submarine HMS Nordkaparen with personal guide, my host dad. I have climbed up and down the submarine. That was cool! And the highlight of Gothenburg was in the evening. We had a nice dinner on the 23rd floor, seeing the whole city through the windows and having the best meal ever! I have chosen the steak tartare, the raw, minced beef, for that night. I still remember how good its taste is until now. It was such a great moment when I was impressed by both food and view in front of me in the same time, thanks to my lovely family. The trip continued, we took a ferry from Helsingborg, Sweden to Helsingør, Denmark. It took around an hour to Copenhagen. When we arrived in Copenhagen, I saw a lot of bikes in every corners. I saw differences between Swedish and Danish languages. I learnt some Danish words as well, such as bøf for beef. We had a good days in Copenhagen together.

The fourth month of my exchange year had begun. December is one of my favorite month due to the atmosphere in this month is so cozy. Many places started decorating Christmas theme. Red and Green is the main colour that can be seen everywhere. It is a month of giving, I enjoyed shopping the gifts for my family. We had a Christmas celebration at our winter house in Tänndalen, where is full of snow and make us feel like the real Christmas. In Sweden, most people have a big celebration on December, 24th (Christmas Eve day). Traditionally, there will be a lot of cookies for breakfast. At lunch, the table was full of many kinds of food, including Surströmming, Swedish fermented herring, fish dishes, salads, meat. Until the Christmas evening, we spent time giving and unwrapping presents, we smiled and thankful together. Christmas made me feel like I was overwhelmed by the coziness and happiness I received from beloved Swedish family.


One of my gifts is practical, I got the downhill skiing lessons with a trainer. So, I have tried skiing for the first time. I came from zero, learning how to stand on the ski, how to break the ski, and how to control myself not to fall. It was hard in the beginning, like everything is. I keep trying again and again till I found the fun of it. And I went skiing with my host brother after the lesson ended. Thanks to my nice brother, he was always there for me. Whenever I fell, he pushed me up again and again. Before the end of the year would come, my host parents rented the snowmobiles for driving up the mountains, we had driven across the big lake, which was full of ice at that time. Then we parked the snowmobiles beside the white and calm slope, somewhere I didn’t even know but it was a nice place to stop and take a break. We had lunch and fika with an amazing view surrounded by white areas. It was the experience I will never forget how cool we were. On the last day of the year, we stayed up until the last hour of the day to say HAPPY NEW YEAR to each other. We had left the floating sky lanterns together, that’s how we celebrate the New Year, simple and cozy.

Again, in April, there is another big celebration I have experienced, called Påsk or Easter day.
They decorated eggs and chickens all around the city, mostly with yellow and green. The weather was warmer but it still had snow on the hill. We went up north, in Tänndalen and had mini cozy party again. I and my brother, a skiing duo, went to ski on another hill this time. I had practised, I knew how to control myself better than last time. We went up to the top of the mountain and skied down together over and over. I was really happy and satisfied in order to reach my goal of the day.

Even though there were many tests throughout May, it still had something’s fun in this month. Sweden also have the Prom yeah! The prom is one of parties that is well-known around the world, especially in the U.S.. I had been to the prom, we walked in the party on the red carpet and be transmitted on NT (Norrköpings Tidningar, Östergötland newspaper) website. The prom provided food, drinks and spaces for relaxing. Everyone dressed properly and enjoyed the night together.

Time flied, I have been staying in Sweden for almost a year. Since I was a third-year student, teachers and friends always talked about the graduation, one of the most exciting things of senior high school that would happen in the end of semester, around the middle of June. The graduation in Sweden is called Studenten, when the third-year student will finish the high school life. Women mostly dress in white while men are in suites, but all of them will wear the white cap, looked like the naval cap, called studentmössa, and that’s ready for the PARTY! woop-woop.For the third-year student, all the test will be finished before June. Because June is only time for celebration :P To begin with the second Friday of June, it was the day called Mösspåtagning, or the ceremony that the student put the studentmössa together, in the other word, the celebration is about to start.
After Mösspåtagning, the studentvecka (the week without any classes but activities), was begun. We had done activities with teachers and other students in order to get the class’s points. Finally, it’s time for the day we have been looking forward to. We spent time with classmates since the breakfast, called Champagne frukost, and then, we went to the church together. After the church’s ceremony, everyone started singing songs along the way back to school. The school’s flags were waved as well as hundreds of whistles were blowed. People sang and smiled together. It was such a happy atmosphere. When we were already in school, each classes met their own mentors for the last time. The mentors gave us the grade we’ve done, and some advices for the future. I also received the farewell gift from the school. That’s nice of them. The last thing that I have done with classmates was being on the studentflask, the truck that driven around the city. Even it didn’t seem comfy to be on the truck with around 25 people who enjoyed dancing than anything else, it was unbelievably fun! I still remembered the environment that was different than other days, people on the road saw us, some smiled while some said something’s good to us. That’s so good I can’t explain how nice it was. We had fun together until the end of the afternoon. Last but not least, I was overwhelmed by a lot of love when I got home. There was a little nice party decorated by studenten stuff around the house. My host’s relatives and friends came to say “Grattis!” to me. We had a very nice time together all night. I could say the graduated day is the best day ever!

Since the day I have been to Sweden, I still recall all the events I have experienced. I could not have this unique and unforgettable exchange year without everyone I’ve met and known, especially my Swedish family, who have been through thick and thin. I was really thankful.
All the things that happened during my exchange period, they will always be carefully kept and be one of my best experiences of all time :-)