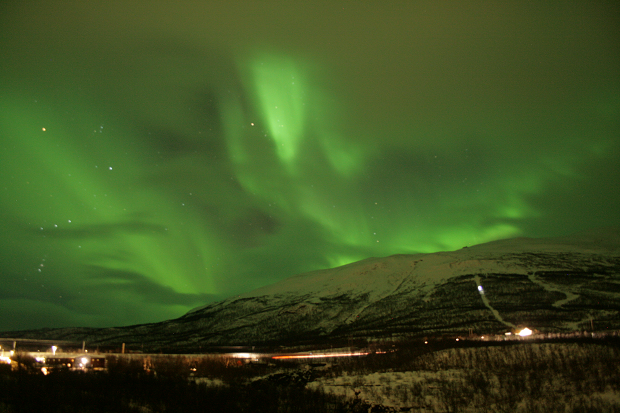 Our trip to Abisko National Park was, for me, was an experience of a lifetime, giving the opportunity to enjoy the far north in winter, and spend time meeting other exchange students. In our few days, we cross-country skied, snow-shoe hiked, ice climbed, and viewed the northern lights.

In Denmark, I am double placed with another exchange student, so we travelled together from our home to Sweden. The beginning journey was a couple of flights to reach Stockholm, where we met everyone else attending the trip.

There were approximately 30 students, and as on all other trips, everyone immediately starts conversations with each other. It is quite predictable what will be spoken. Questions such as “where are you from”, “where are you living”, “why did you decide to become an exchange student?”, and “what is your host family like?” tend to begin the talking.

It seems exchange students have an inherent ability to not stop talking to each other, which is nice. One learns much from these conversations. Exchange students seem to cling together, because we all can find understanding and empathy for each other, being in a common situation in a foreign land from our own.

Stockholm being only half way to our destination, we all continued further north by train, which took about seventeen hours. Many were concerned with what boredom would come, but in reality, it was not bad at all. We left in the evening, slept the night in six people compartments, and arrived at the Abisko Tourist Station mid-morning.

In Denmark, people use the word “hyggelig” a lot. The train ride could be described as such. We crammed many into small sleeping compartments, telling stories, jokes, playing games, and talking about language.

As we came further north, there was more and more snow, and less and less light. It was cloudy the first day, and snowed, so not much was to be seen. We settled ourselves into out rooms in the hostel, and had a tour of the Sami camp nearby, learning a bit about their culture, and eating reindeer meat. We were all anxious if we would miss the northern lights since it was cloudy. Each evening, we had dinner together in the common kitchen, with one of the adults from the exchange program cooking for everyone. 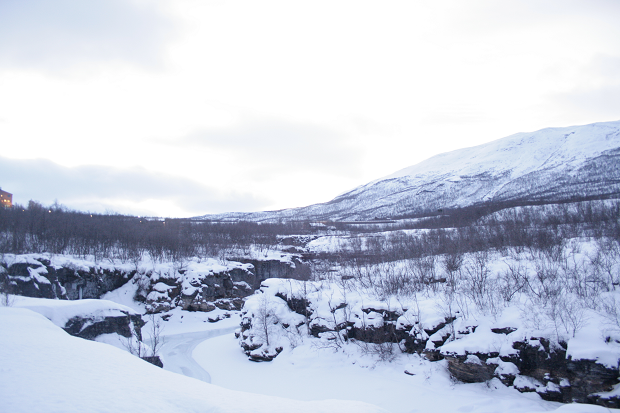 After a night’s rest, our busiest day began. We had breakfast in the hotel restaurant, and then split to our different activities that were offered by the tourist station. I was in the group skiing. A guide of the park prepared, and then led us through the park for about five kilometers. It was a much clearer day than before, and the air was still.

Many had dressed for very cold weather, but even though it was below freezing, we were moving a lot, and built up a sweat. The snow was knee deep, and fresh, so we sank into it on our skies. I have only done downhill skiing before, and I must say cross-country skiing is very difficult. The more tired I got, and more likely I fell.

Shortly after lunch time, we returned, I grabbed something quick to eat and joined another group in a snow-shoe hike. It became dark around this time, but still, we were kept warm from walking, and spotted spoors of moose, fox, and deer. At dinner time, my legs were shaking from exhaustion.

Everyone was, again, anticipating northern lights. It was much more probable that night. I was sitting talking to others in the kitchen after dinner, when someone from outside sent a message to a friend that was at the eating table: there were northern lights. People yelled and jumped up frantic from their seats to run out side when they heard the message.

I grabbed my camera and tripod from my room, got my coat, and came outside. I immediately headed for the beach on the lake, where there was the best viewing. It was about 19:30, and from then on until the early morning, many were running from place to place across the snow, through the trees, meadows, and along the cliff ledge. Every time you turned a corner, you ran into a someone you knew. The lights continued steadily all night, and we had to take breaks occasionally to warm up.

A few of us went to the sauna for this. After being relaxed and a bit tired, we had to then cool off, so we ran out the door in our swim suits and jumped in the snow. While lying in the snow in shock, and gazing up to the sky, we noticed the northern lights were even better than before. We sprang back into our clothes, and stayed out with cameras until 2:00 in the morning.

At 1:00, however, there were the best lights of the night. A red color mixed into the green, and the sky brightened. It illuminated the landscape with its swaying light across the sky. You could see more detail in the landscape than when there is a bright full moon. It only lasted for a minute, then it was gone. It is amazing how bright they can become, and how fast they can move. We were told that was the best night Abisko had in a while for the northern lights. 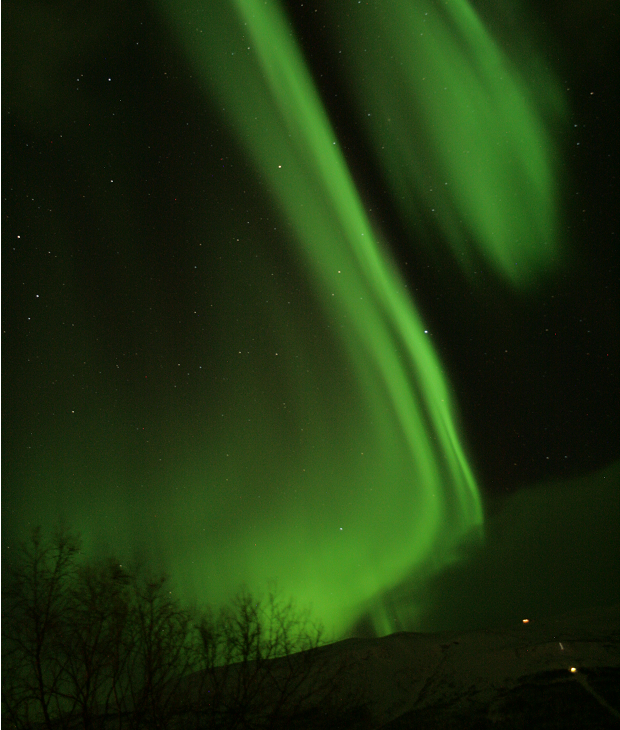 That night, and the next day, I began getting sick with a sore throat, but I pushed myself to not sit around. My last excursion on our trip was something I never would have dreamed doing. It, like the skiing and snow-shoe hike, was offered by the Tourist Station, not the exchange company, so it did cost some money, but I knew I would not get another opportunity to do it. That was ice climbing.

One other exchange student and I did it. We walked to the cliff ledge, then down a small path to the bottom of a frozen waterfall. I had never done any climbing of any sort before that, and I have to say it was really nerve-wracking, but I made it to the top. My arms were aching afterwards. 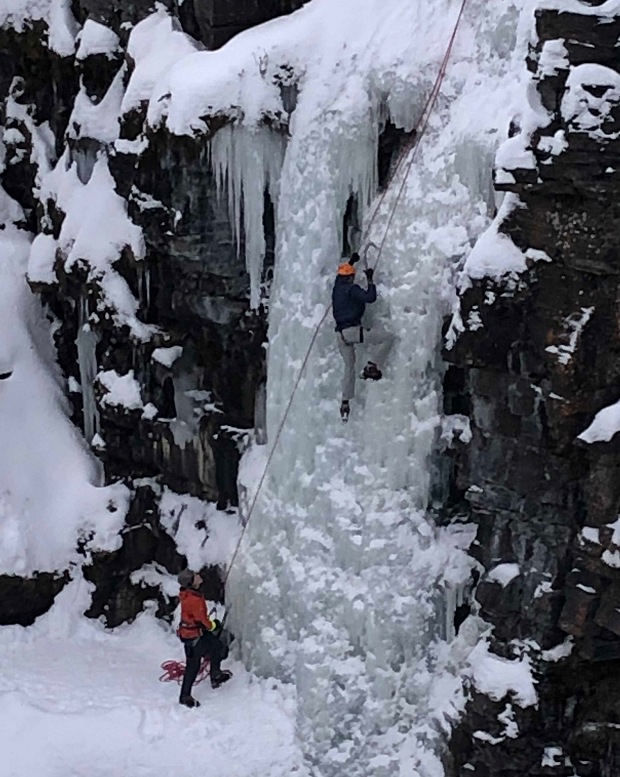 After lunch, we had packed up to wait for the train. We were all exhausted by then and ready to sleep. However, I think from knowing we did not have much more time left, we enjoyed ourselves together on the train ride back to Stockholm.

Whenever I travel, I have an eagerness to see as much as possible. I am always on the go, focused not on having a relaxing vacation, but what can I experience and learn. One thing I now know from the experience is that on these types of trips with other exchange students, enjoying the time with them is just as important as seeing the places you are going. Just in the fact the you are all exchange students forms a closer bond than with others you may meet on our exchange year.

Coming to Denmark, I know many people that I would not have met if I had stayed in my home country, but from these smaller travels, I now have many more connections to many other parts of the world, and I believe that to be a very lasting and positive result from the excursions.

I say to myself that I have only been given a brief introductory trip to Abisko National Park with the need to return and see more of it, but I also remember that I have been given the pleasure of having time with thirty people from around the world, learning about people’s homes and cultures, and changing my perspective of the world. I feel that there would have been something lacking if I stayed in my home country.

Something seems to lack in a classroom textbook and a test. Staying in the same place your whole life leaves so much to yet be experienced. Going out to see the world on exchange, going out to meet new people, even if it is a year off of school, holds a much deeper value in one’s perception and understanding of people and the world than anyone can get from staying at home. That was the real enjoyment in traveling to Abisko.