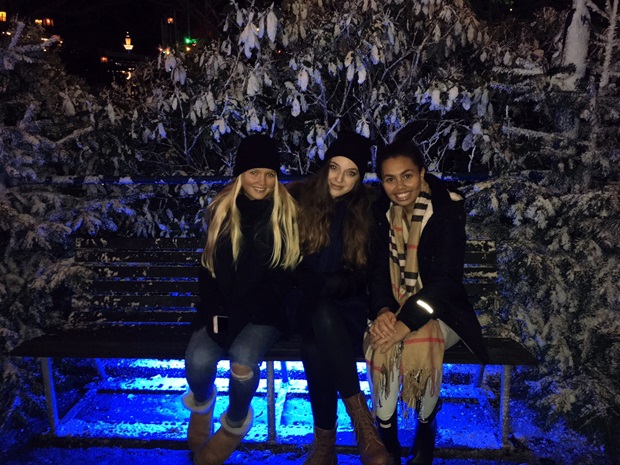 As a fifteen year old living in sunny and hot Brisbane, Australia of course a cold, beautiful and amazing country like Sweden sounded like the perfect place to go for my summer holidays and it was the best choice I made with no regrets.

I live with my host family in Partille, 7 minutes by train to Göteborg the second largest city in Sweden. There are 4 members in my host family (excluding me), my host mum, dad, and two sisters one 15 like me and an elder one who is 18. Their family is very close knot and the two daughters both play handball a sport that isn´t common at all in Australia in fact the first time I actually saw a real game was here in Sweden. We go to a handball game weekly and will be going to a handball tournament that my host sister will be completing in for her club in Lind in the south of Sweden after we go to the families summer cabin for Christmas on the west coast.

School in Sweden is different to school back home but at the same time there are a lot of similarities I´ve found. The relationship between teachers and students are very friendly to the point where the call their teachers by their first name unlike in Australia where we say Mr Smith or Mrs Hill. This allows the students to feel comfortable with their teachers to talk about any problems and is very beneficial. The students have much more freedom and although they aren´t allowed to be on their phone they teachers won’t fight you or issue detentions etc. as your learning is in your own hands.

Swedish Meatballs – Ikea and Sweden´s globally loved dish. I thought that this would be a westernized Swedish dish like sushi in Japan but it turns out it isn’t and they truly love their meatballs. I don’t like the meatballs at Ikea but I soon came to learn that a real homemade Swedish meatballs is nowhere else but Sweden really lets down the meatballs at Ikea. Their meatballs are possibly my new favourite food. Be prepared for a lot of potato or as the Swedish say potatis (one of the first Swedish words I learnt).

I encourage any future exchange students to take chances as you may never get the same opportunities again. Whether that’s simply joining a music group or sporting team I urge you to take the chance. I decided to join a water polo team (the only team in Göteborg) and I made friends with the only other girl in the team who luckily for me translated everything for me in English. Although training here is more swimming and harder as we train with ex. National water polo players I´ve only benefited as I’m getting stringer, getting out of the house and meeting new people in a new pool, city, country and continent.

I haven’t regretted my choice on going on exchange or choosing Sweden. I didn’t have to many expectations when coming to Sweden in fact I think the only expectation I had was that it was going to be cold which it is in December/January but by limiting my expectations I think I was able to experience more without being let down.