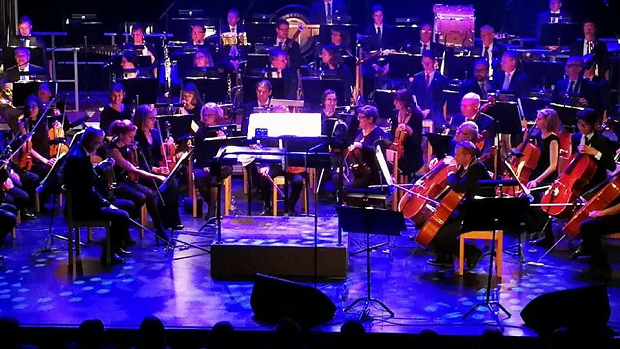 I don’t know how I shall begin this post. Maybe I should introduce me first. Okay, my name is Luise, I am 16 years old, I come from Germany and I live since 2 months in Sweden, Gävle. That’s a city 200km up north from Stockholm.

My life here is really funny and I am already included in my class and other groups, for example the orchestra. Because I played viola in Germany and I wanted to keep doing it in Sweden, my hostmother asked a collegue, who plays in one, if I could join it. I could, so the collegue took me with her to the first rehearsal. There I realized that this orchestra is the “Sandviken Symfoniorkester” and the people there are mostly professional instrumentalists. When the collegue said there are mostly people older than me, I thought it would be a hobby orchestra, so I flipped out a little, because I didn’t trust my playing skills that much for surviving there and I was so far only in orchestras of my music school in Germany where all are about my age and we don’t play so difficult things in a short time.

But the first rehearsal was great and I saw that we play the violin concert e-minor of Felix Mendelsohn-Bartholdy, what my absolute favourite violin concert is (and to be honest the only one. Other concerts are too high (the concert of Bartholdy is actually really high). Let us just say, I don’t play viola without a reason). What also different to my orchestra experience is, that we don’t have only two concerts the year. (One for Christmas and one in the summer), so our first concert was circa one months after the first rehearsal. We usually have rehearsal on Mondays but for the concert we had soloists and a special rehearsal on the Friday before the concert. I was really excited, I mean I would meet the second violinist I would see performing the violin concert from Bartholdy (The first time was a schoolconcert with my class in Germany)! Actually I haven’t spoken a word with the soloist, because I was too shy, but his playing was absolutely amazing.

Maybe I should talk a little about the rehearsals itself. We start 6:30 pm and finish 9:30 pm. In between we have a break about 30 minutes where we get a fika (usually a bread with cheese and tea, juice or coffee), that’s really cool, because in Germany we have a break too, but we don’t get something to eat (I mean, we can buy something, but that’s not the same.). During one “project” (means from one concert to the next) we have one conducter, so I got to know two different yet. (The concert I’m going to talk about is actually more than a month ago and I just realized that the next concert is on Saturday.)

Okay back to the concert day (I’m sorry that I have no order in this text.). Because my hostmum wasn’t at home, I had to stay in another family during the days the concert was. I had really luck because there was a girl who knows a lot about styling and makeup, so she did my makeup after I got dressed in the dress I only bought for events like this concert (I had no black dresses.). I’m not a person who does more makeup than concealer and I don’t really need mascara, because my lashes are really long and black, so I don’t really know anything about makeup, but what the girl did (I have no idea if I’m allowed to say her name) was amazing.

After a short rehearsal (in german it’s “Anspielprobe”, I have no idea what’s it in English) we got fika and I got nervous. And when I say, I got nervous I don’t mean a little. We had to put microphones on our instruments, and like I said, I don’t trust my playing skills that much so I was afraid that everyone will be able to hear me when I’m playing something wrong. The second reason I was nervous was that I’ve never played a concert before a public, that came only to hear the concert because they were interested in the music and not because their children play in the orchestra that they are “forced” to come to the concert.

I’m not going to say that the concert was perfect and that everything went good, because it wasn’t. I mean, sure nobody heard what I played wrong, but I mean, I heard it. And that the other three people my age play their instruments perfectly isn’t helpful at all, too. I mean I play viola for more than 7 years now, but I don’t play that good like the others do, even when a lot of people say, that I play really good.

But I enjoyed the concert a lot and it was an amazing experience. I’m just a little afraid of Saturday, because we play a lot of Elvis and I was max. at three rehearsals (I missed only one). Sure we have rehearsal today and maybe on Friday again (I don’t know, I guess I’ll get the information today), but it’s not much at all. And remember, in Germany I had two concerts the schoolyear. But we’ll see, how it’s going to be. Maybe you’ll hear from me again and then I can tell how it was.